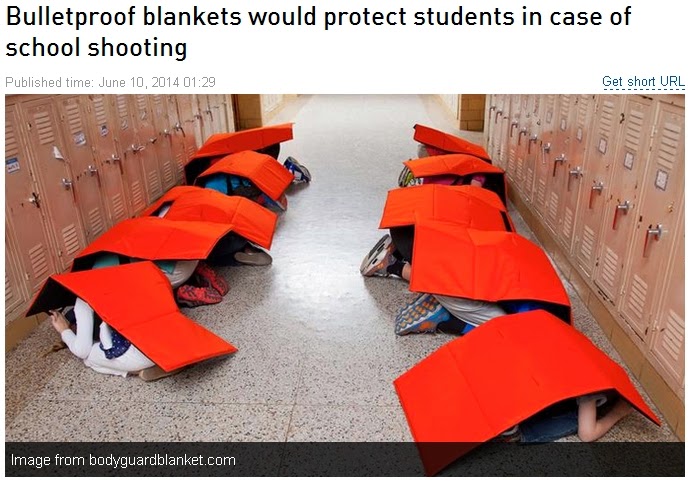 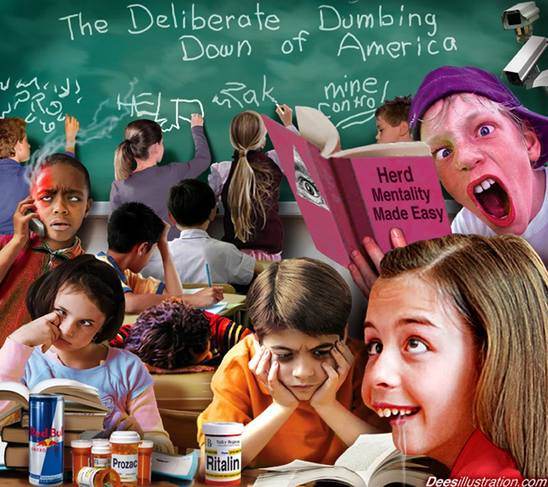 Bulletproof blankets would protect students in case of school shooting

***
RT 2014-06-10
Nervous about the rash of school shootings that have taken place over the past decade, an Oklahoma company has launched a new product that, with a lack of effective gun control laws, promises to protect schoolchildren will bulletproof blankets.

The Bodyguard Blanket, designed and manufactured by ProTecht, is advertised as a 5/16-inch thick bulletproof rectangle that students can wear over their back in the event of a tragedy at school. The product comes adorned with a backpack straps and is reportedly able to protect against nails and shards of metal as well as bullets.

ProTecht, which posted a video of a test blanket being shot with test gunfire, is made with the same material that makes up the body armor military and police officials rely on.

“We’re trying to stop that blunt-force trauma when that rubble is falling down on a child for instance,” developer Steve Walker told the Oklahoman newspaper.

Walker, a podiatrist, said the idea was born when he was trying to come up with an idea that would protect children without access to a tornado shelter from harsh weather and from the debris that it creates, particularly in Oklahoma.

He turned over an outline of the idea over to Steve Schone, an inventor, who thought of equipping the product with a high-density plastic used in ballistic armor, yet is lighter than the usual Kevlar technology.
“Instead of bending over and hoping for the best, they’re afforded an extra layer of protection,” Schone said of the children who might someday have no choice but to use the Bodyguard Blanket.

One major hurdle the ProTecht team must overcome is the price they are charging. At nearly $1,000 per blanket, already-strapped public schools could have a difficult time coming up with enough money to deploy the protective gear.

Yet the owners have touted the blankets’ versatility, especially in the event that a community is not equipped with enough storm shelters.

“By no means would we ever say that this is more protective,” Walker said. “But when you have budget constraints, this might be a viable alternative.”[...] 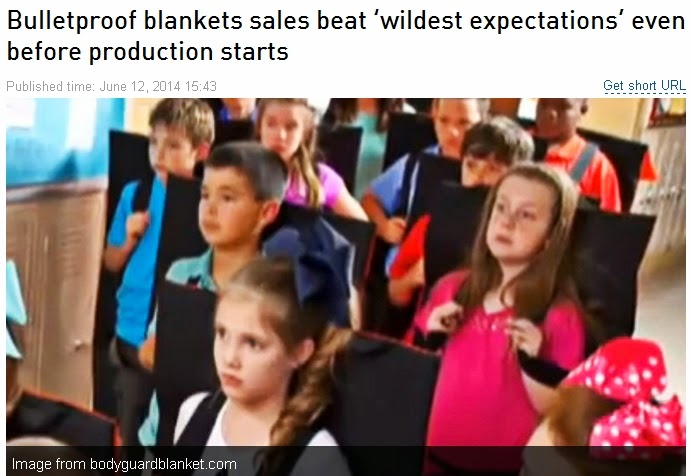 RT 2014-06-12
In the wake of dozens of school shootings over the last year and a half, many schools and parents have decided to turn to bulletproof school supplies in order to save children from unexpected disasters, most recently embracing beefed-up blankets.

According to the Huffington Post, an item called the Bodyguard Blanket has not even been available to purchase for two weeks, but sales for ProTecht’s product are incredibly strong. In fact, the company’s managing partner, Stan Schone, stated the safety device has already “far exceeded our wildest expectations.”

"We have been contacted by several private and public schools that have shown great interest and by many concerned parents wanting to purchase them as well," he told the Post in an email. "Private sales have been very spirited and far greater than anticipated."

Originally designed as a way to offer students more protection in the event of a tornado, the $1,000 blanket resembles a padded mat with straps that can be worn like a backpack. The blanket is 5/16-inch thick and covers a student’s entire backside.

- When a child ducks and covers, the pad is strong enough to protect users from 9mm bullets as well as falling debris like metal shards and nails.


The Bodyguard Blanket is just the latest in a line of bulletproof school supplies by various manufacturers, many of which see sales spike following school shootings. Following the Sandy Hook massacre, for example, the Washington Post reported sales of bulletproof backpacks and other supplies doubled or tripled, in some cases rising more than 500 percent.

As noted by NBC News, events like the Sandy Hook massacre and the Virginia Tech shooting have lingered in the minds of schools, and they have proven willing to spend money in order to protect their students.
Yet for schools that, on average, the National Center for Education Statistics says spent about $11,000 per student as of 2010-11, adding $1,000 each is a significant expense. For ProTecht’s Schone and Steve Walker, the Bodyguard Blanket may not be able to deliver all the benefits of safe rooms or tornado shelters, but they are still cheaper alternatives for institutions short on money.

“By no means would we ever say that this is more protective,” Walker said to the Oklahoman. “But when you have budget constraints, this might be a viable alternative.”
[...]
http://rt.com/usa/165572-bulletproof-blankets-sales-beat-expactations/ 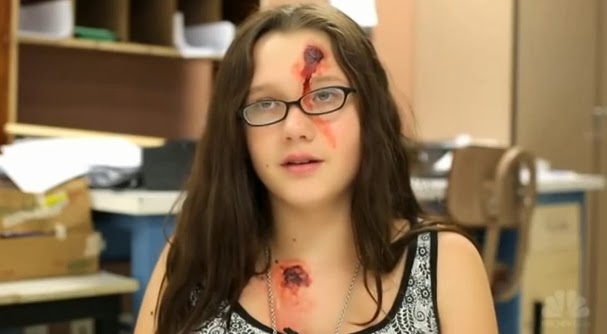 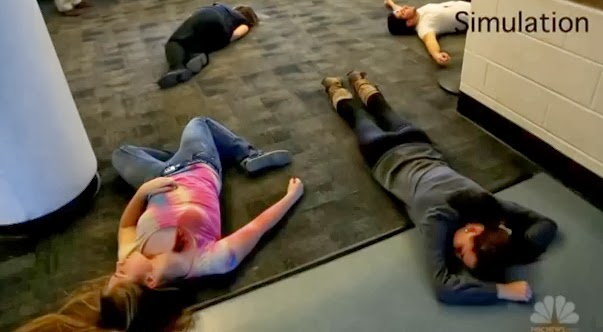