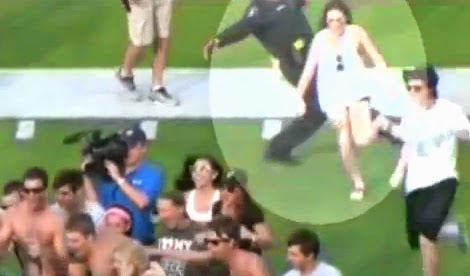 Informationliberation 2014-06-06
For the crime of violently assaulting a host of young high school girls and boys while they celebrated their team's victory after a soccer game, officer George Bermudez, the Georgetown, Texas police officer filmed carrying out this public assault was essentially rewarded with a paid vacation.

The officer was placed on paid leave April 22nd, and only just now did the chief rule on his "punishment," a meager 40 day suspension without pay. Considering the officer had been enjoying a paid vacation the last 45 or so days courtesy of local taxpayers, he'll pretty much break even and get another 40 days time off without having to do any work.

The police report noted Bermudez failed to take any responsibility nor blame for his actions during the initial investigation, only changing his tune during a "second round of interviews" in which he admitted he "acted inappropriately."

Fact is, the cop should have faced multiple assault charges, as any other person would have if he treated the cop in the same manner he treated others. Instead, his fellow "law enforcers" rewarded him with time off and paid leave.