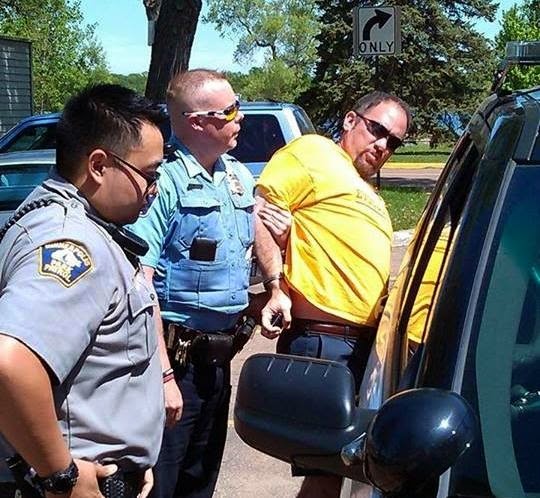 Thursday, Holbrook was gathering signatures at a public park when police stopped his team from interacting with parkgoers. Holbrook was handcuffed, detained and issued a citation for selling in a public space without a permit. RT's Ameera David speaks to the gubernatorial candidate to get his account of the incident.
***
*** 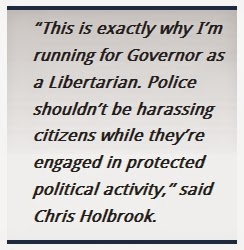 - He was simply talking to people about liberty when he was approached by some true Minnesota jackboots destined to stomp out what little rights are left to Americans.


"You guys need to contact the park board and get a permit," said the jackboot tyrant "You can't promote, you can't do any of that stuff without a permit."

Apparently this power tripping cop's version of the Constitution that he swore an oath to, lacked the part about prohibiting any laws that abridge the freedom of speech.

- This is America ladies and gentlemen, talk to people in a park about freedom and go to jail.

Mr. Holbrook was taken away by police and charged with advertising without a license, a misdemeanor offense.  Petitioning is not considered advertising and is a protected activity under Minnesota and Minneapolis ordinances, the Libertarian Party contends on its website.

“Minor parties already have such a disadvantage in Minnesota just getting on the ballot. When you have the police arresting you while you are legally gathering signatures for ballot access, that makes it almost impossible,” says Cara Schulz, LPMN Executive Board member.