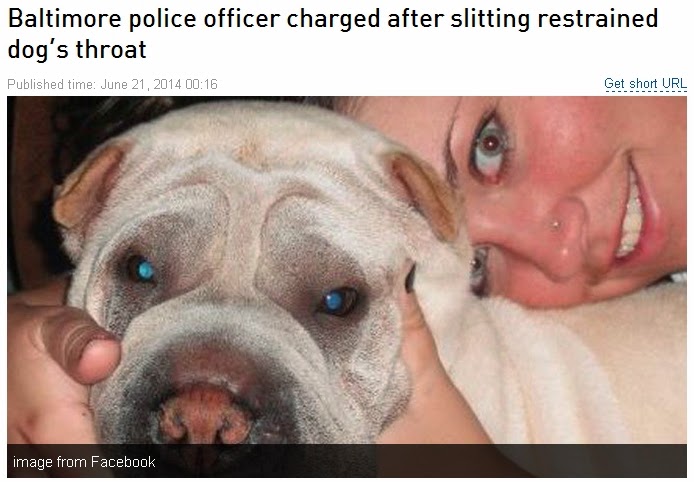 ***
RT 2014-06-21
A Baltimore police officer is facing felony animal cruelty charges for slitting the throat of a restrained dog, and another has been suspended for helping. Officer Jeffrey Bolger also threatened to gut the dog, witnesses said.

“- I’m going to [fucking] gut this thing,” witnesses heard Bolger say as he got out of the police vehicle, according to the charging document.


The dog, a 7-year-old shar-pei named Nala, had escaped from owner Sarah Gossard’s yard on Saturday through an open gate after Gossard had let her out. Nearby resident Sandy Fleischer found Nala and tried to check the dog’s tags, but Nala nipped her, causing a superficial wound.

"The dog was more scared of not knowing where it was and being thirsty and disoriented. The dog bit me out of fear because I tried to touch it, which was my fault," Fleischer told told WBAL-TV. The dog was not aggressive, she added.

Fleischer then called police, and officers from the Southeastern District responded and corralled the dog in an empty lot. The officers captured Nala with a long dog-control pole.

- Then Bolger pulled out a knife and slit Nala’s throat as Officer Thomas Schmidt held her down.

- But even before officers killed Nala, they were being cruel, Fleischer said.


"One police officer said, 'Let's get the noose on the dog,' and you could see the police officer twisting and hurting the dog, bringing it to the ground to the point where the dog's face is on the ground. You could hear the dog screaming and crying in pain," she said. "I did see one officer that had been extremely aggressive that did have his knee into her chest that was tightening the noose. It seemed (they were doing it) relentlessly and unnecessarily."

Police agreed the killing was unnecessary, as the dog was contained.
"It was a complete violation of protocol," BPD spokesman Eric Kowalczy said, according to CNN. "It's not often police speak out against one of their own, but we are all truly appalled."

BPD Deputy Commissioner Dean Palmere called the incident “outrageous and unacceptable” at a news conference. “Officers were appalled by what they saw, as were other citizens,” he said.

“We have no words to describe this. To say they’re were appalled at the allegations I think is an understatement.” Deputy Commissioner Jerry Rodriguez said. "As we stand here before you the officer is being arrested for a felony charge.”

“She was already restrained. It wasn’t necessary at all. It was just an act of cruelty. That’s what it was,” Gossard told WJZ. “I never thought in a million years the police would show up and cut my dog’s throat.”

- Gossard described Nala as sweet and innocent, as well as passive and non-aggressive.


Shar-peis, which were originally bred in China as herding dogs, were turned into fighting dogs by gamblers in Shanghai because the wrinkles around their neck allow them to continue fighting while their foe is latched onto them, Joyce Hanes, vice president and treasurer of the Mid-Atlantic Chinese Shar-Pei Rescue Operation, Inc. (MACSPRO), said in a phone interview with RT.

“Although some were genetically trained to fight other dogs, they have no genetic disposition to fight people,” Haynes added. “There was absolutely no reason to put this dog down until such time as it has been tested to see what its real disposition was.”

“You have to look at each dog individually… I have had over 11 shar-peis, and never had any feeling of or any reason to put any of them down,” Haynes said.

Bolger was charged with felony counts of aggravated animal cruelty, animal cruelty and malfeasance in office. He has been suspended without pay, police said, according to the Baltimore Sun. Schmidt was placed on paid administrative leave for holding the dog down. Police also said that the knife Bolger used was not department-issued.

“I don't want [Bolger] to have his job. I don't want him to be able to go on calls and act like that to a person, or to a dog. That's not OK. It's not OK," Gossard said to WBAL-TV.

Police told Gossard that Nala choked herself, but then said that officers feared the dog was rabid. Animal control officers said they “euthanized” Nala, Gossard said to WMAR.

“Police said she was foaming at the mouth. She’s a slobbery dog,” she said. “I think it’s a major overreaction and a lot of assumption.” 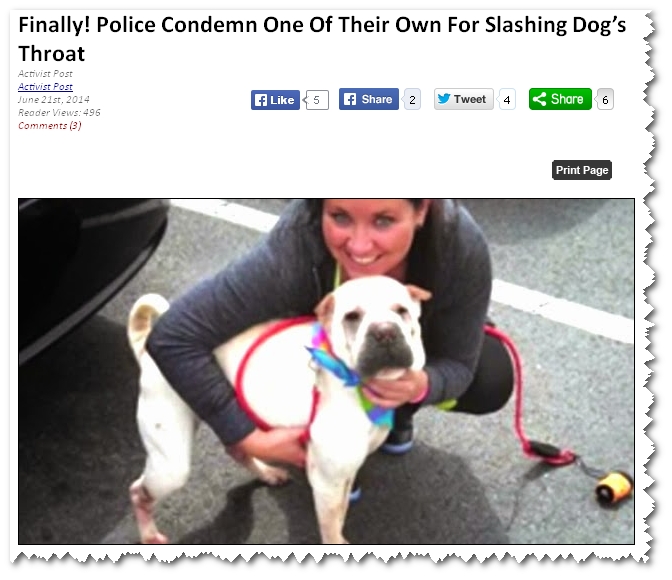