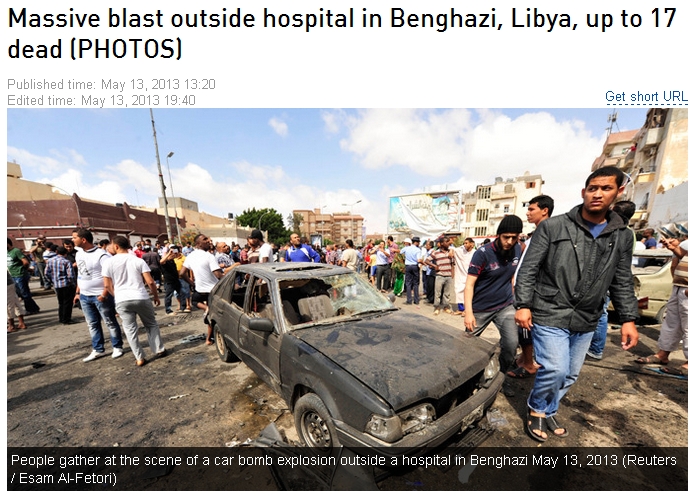 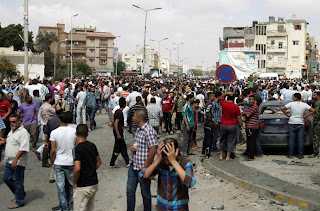 RT 2013-05-13
At least 17 people, including three children, were killed and another 30 injured when a car bomb exploded in crowded area outside a hospital in Benghazi, Libya.
*
Libya’s Defense Ministry reported that 17 people died in the blast, shortly after Libyan Deputy Interior Minister Abdullah Massoud confirmed 15 deaths.

“Fifteen people have been killed and at least 30 were wounded in the explosion of a car bomb near the hospital," Deputy Interior Minister Massoud said.
Libyan security official Abdel-Salam al-Barghathi said the car bomb was parked outside a bakery near the city's main hospital, AP reported.

"I saw people running and some of them were collecting parts of bodies," Reuters quoted a witness as saying.
*
http://rt.com/news/benghazi-hospital-blast-204/ 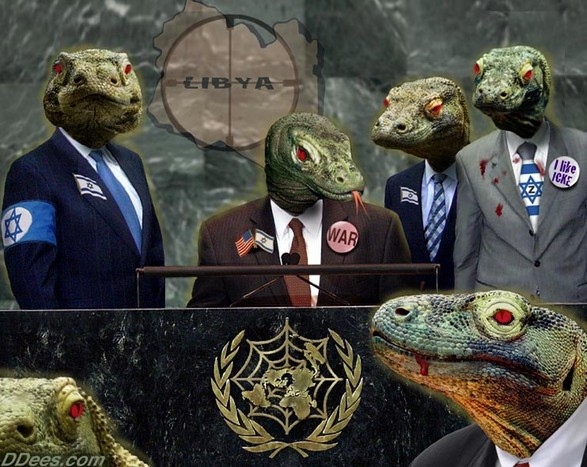 (Texten avser videon längre upp)
Involvement by Western intelligence services has turned Libya into a terrorist playground, the way Iraq has become after the US invasion, geopolitical analyst Patrick Henningsen told RT.
*
A car bomb has exploded in a crowded area outside a hospital in Libya's second largest city, Benghazi, with the blast claiming at least 15 lives. Henningsen, from the 21st Century Wire website, believes that US strategy for the Middle East region is the main reason behind the disintegration of the countries there. When asked about Syria, he says one only has to look at Libya and Iraq to picture what would happen in the event of Bashar Assad’s fall.
*
http://rt.com/op-edge/libya-iraq-us-syria-231/

Publicerad den 14 maj 2013
13 people were killed, and dozens wounded in a car blast that ripped through a crowded street in Libya's second largest city, Benghazi. This comes amid a hectic pull-out of foreign embassy staffers from the country - due to the recent spike in violence. Let's get more perspective on the situation now, with Eric Denece, Director of the French Center for intelligence studies.
* 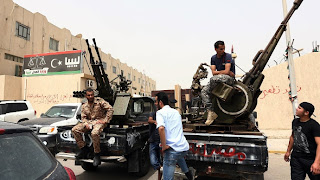