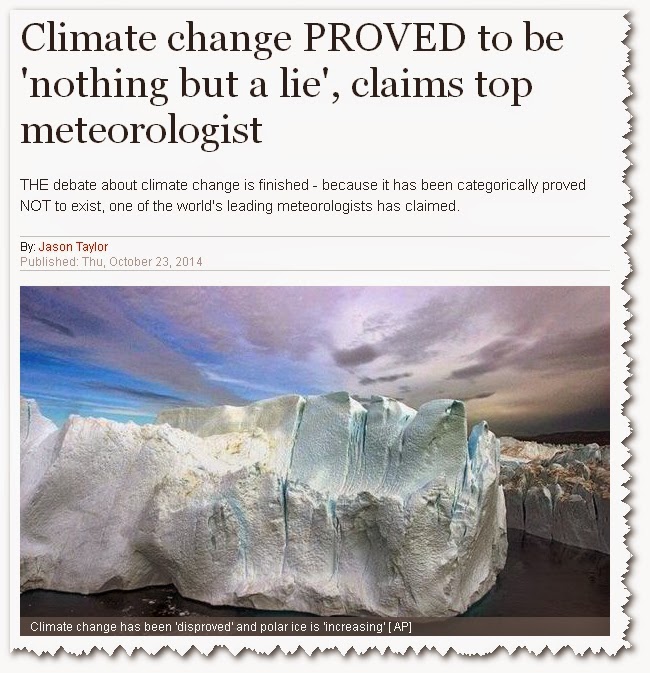 BREAKING NEWS! CLIMATEGATE COMES TO THE UNITED STATES! MEET THE TWO MEN WHO HAVE DUG THROUGH SEVERAL LAYERS OF COMPUTER CODES TO UNCOVER MANIPULATION OF THE WORLD TEMPERATURE DATA TO SUPPORT THE CLAIMS OF GLOBAL WARMING. THIS IS A MAJOR CLIMATE SCANDAL INVOLVING UNITED STATES GOVERNMENT AGENCIES.

A computer programmer named E. Michael Smith and a Certified Consulting Meteorologist named Joseph D'Aleo join the program to tell us about their breakthrough investigation into the manipulations of data at the NASA Goddard Science and Space Institute at Columbia University in New York and the NOAA National Climate Data Center in Ashville, North Carolina.

Segment 1: CO2 does not cause significant warming of the earth
http://www.kusi.com/weather/colemansc...

Segment 2: How AL GOre and the UN became involved in Global Warming
http://www.kusi.com/weather/colemansc... 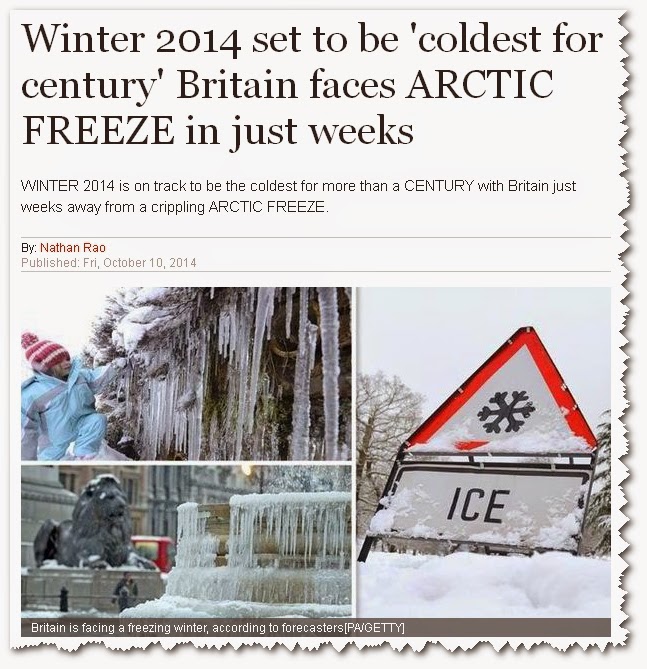 This new 2010 321-page Climate Depot Special Report — updated from the 2007 groundbreaking U.S. Senate Report of over 400 scientists who voiced skepticism about the so-called global warming “consensus” — features the skeptical voices of over 1,000 international scientists, including many current and former UN IPCC scientists, who have now turned against the UN IPCC.

This updated 2010 report includes a dramatic increase of over 300 additional (and growing) scientists and climate researchers since the last update in March 2009. This report’s release coincides with the 2010 UN global warming summit in being held in Cancun.

The more than 300 additional scientists added to this report since March 2009 (21 months ago), represents an average of nearly four skeptical scientists a week speaking out publicly.

- The well over 1,000 dissenting scientists are almost 20 times the number of UN scientists (52) who authored the media-hyped IPCC 2007 Summary for Policymakers. 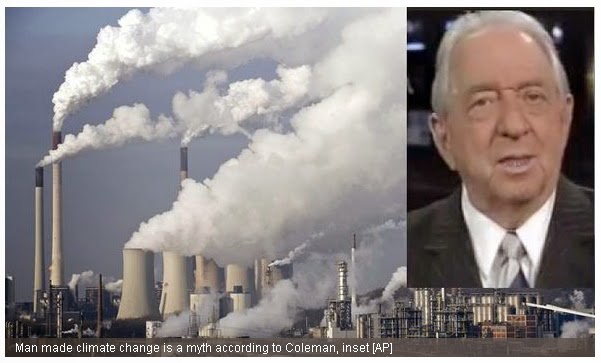 http://www.express.co.uk/news/nature/526191/Climate-change-is-a-lie-global-warming-not-real-claims-weather-channel-founder
***
--- Climate change PROVED to be 'nothing but a lie', claims top meteorologist ---
***
2014-10-23 www.express.co.uk
John Coleman, who co-founded the Weather Channel, shocked academics by insisting the theory of man-made climate change was no longer scientifically credible.

Instead, what 'little evidence' there is for rising global temperatures points to a 'natural phenomenon' within a developing eco-system.

In an open letter attacking the Intergovernmental Panel on Climate Change, he wrote: "The ocean is not rising significantly.

"- The polar ice is increasing, not melting away.

- Polar Bears are increasing in number."

"Heat waves have actually diminished, not increased. There is not an uptick in the number or strength of storms (in fact storms are diminishing).

"I have studied this topic seriously for years. It has become a political and environment agenda item, but the science is not valid."


Mr Coleman said he based many of his views on the findings of the NIPCC, a non-governmental international body of scientists aimed at offering an 'independent second opinion of the evidence reviewed by the IPCC.'

He added: "There is no significant man-made global warming at this time, there has been none in the past and there is no reason to fear any in the future.

"Efforts to prove the theory that carbon dioxide is a significant greenhouse gas and pollutant causing significant warming or weather effects have failed.

US News and World Report noted that many of the world’s largest businesses, including Coke, Pepsi, Walmart, Nestle, Mars, Monsanto, Kellogg, General Mills, Microsoft, and IBM, "are now engaged and actively responding to climate science and data."

Mr Coleman's comments come as President Barack Obama came under fire from climatologists as federal data revealed The United State's energy-related carbon pollution rose 2.5 per cent despite the President's pledges to decrease it.

President Obama told 120 world leaders at the United Nations climate summit last month that America had done more under his watch in cutting greenhouse gases than any other country.

Despite this, the Energy Information Administration's Monthly Energy Review showed an increase in the use of energy from coal.

World leaders have pledged to keep the global average temperature from rising two degrees Celsius above pre-industrial levels to prevent the worst consequences of climate change.

The US, along with the UK and other developed countries, is expected to pledge further actions on climate change early next year.

Climate expert William Happer, from Princeton University, supported Mr Coleman's claims.
He added: "- No chemical compound in the atmosphere has a worse reputation than CO2, thanks to the single-minded demonisation of this natural and essential atmospheric gas by advocates of government control and energy production.

"The incredible list of supposed horrors that increasing carbon dioxide will bring the world is pure belief disguised as science."

In 2010 a high-level inquiry by the InterAcademy Council found there was "little evidence" to support the IPCC's claims about global warming.

It also said the panel had purposely emphasised the negative impacts of climate change and made "substantive findings" based on little proof.

"- I have studied climate change seriously for years.

- It has become a political and environment agenda item, but the science is not valid." 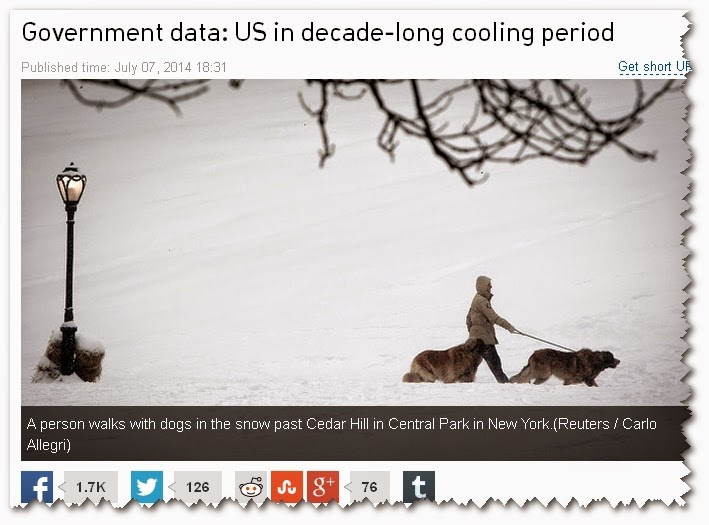 RT 2014-07-07
New government data suggests that the average temperature in the United States has cooled by approximately 0.7 degrees Fahrenheit during the last decade.
***
The statistics come courtesy of the National Oceanic and Atmospheric Administration, which for nearly a decade has been collecting weather data from 114 different stations administered by the US Climate Reference Network, or USCRN, across the country. Combined, the weather stations are among the most state-of-the-art and advanced in the nation.

Last month, Watts Up With That? blogger Anthony Watts wrote that an analysis of the last few years’ worth of data implies the US has cooled slightly, not warmed.

“Not only is there a pause in the posited temperature rise from man-made global warming, but a clearly evident slight cooling trend in the US Average Temperature over nearly the last decade,” Watts wrote after examining the data.

“We’ve had a couple of heat waves and we’ve had some cool spells too. In other words, weather,” he wrote.

Watts wrote that by taking into account not just the average temperature anomalies captured by USCRN, but the maximum and minimum temperature data plots made available as well, the US experienced a very subtle drop in temperature which, nevertheless, he qualified as a “notable” cooling trend.[...]
***
http://rt.com/usa/171044-noaa-climate-change-cooling/
***

***
'Journalism is printing what someone else does NOT want printed: - Everything else is public
relations.'